You are here: Home / Featured

This is not your average block party, let’s get out and clean our blocks  and meet our neighbors on Saturday, June 12.  Volunteer to be your block’s party captain and set your party time, register at the link below to get garbage bags and fliers to invite your neighbors delivered to your house.  The captain is responsible for handing out the fliers and inviting their neighbors to come out, visit and clean up.

And since we LOVE a social media challenge…post pics of your block party and tag the Greater Belhaven Foundation and use #100reasonsbelhaven to enter your pic!  Prizes will be given to the poster of the “Most Improved Block” and “Most Creative Block Party”. 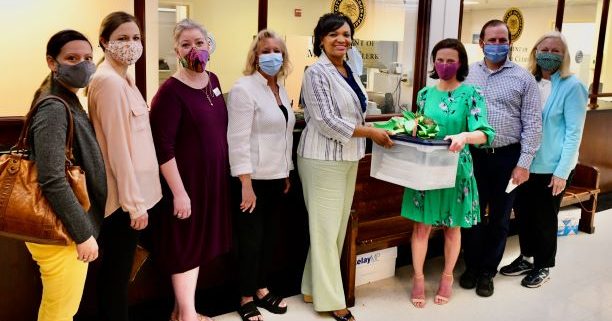 The Greater Belhaven Foundation (GBF) is excited to announce that the owners of more than 60% of the taxable parcels in Greater Belhaven have signed the petition requesting the creation of a Community Improvement District (CID). GBF submitted the petition to the City Clerk’s office on Thursday, May 6, 2021. Once signatures are verified and City has accepted the petition, GBF will submit an initial strategic plan for the first year of the CID. After this, the City will set a date for a special election at which registered voters in Greater Belhaven may vote on the proposal to create the CID. Proceeds from the CID funds will total around $200,000 annually. They can be used for a variety of projects including landscaping, parks, infrastructure, security enhancement, and even as matching funds for grants for larger-scale projects.

“We are excited about the potential for CID funds to make Belhaven an even greater place to live, work, and raise a family,” said Margaret Oertling Cupples, CID Committee Chair. “We encourage everyone to get out and vote in favor of the CID later this year.”

Greater Belhaven, consisting of the Belhaven and Belhaven Heights neighborhoods, is comprised of over 1700 single family and multifamily homes as well as numerous businesses.  GBF began collecting signatures for the CID in October 2019. Despite the global pandemic, property owners realized the benefit of a CID for the historic neighborhood and have helped to surpass the 60% signature requirement.

“I am so excited to have completed this part of the process and am so thankful for the neighborhood support,” said Casey Creasey, Executive Director of GBF. “The CID will be such a benefit to our community allowing enhancements for our three neighborhood parks, sidewalk improvements, and other features. Funds can also be used for security,  lighting, minor infrastructure repair, long-range planning, and so much more. We would love to hear from Greater Belhaven residents and property owners with your ideas for improvements.”

Legislation requires that a CID plan and funds be managed by a 501(c)(3) nonprofit, like GBF. The funds, a maximum of $6 per every $1000 of assessed value of a parcel, will be collected with property taxes yearly by the City of Jackson and disbursed to GBF. CID proceeds must be maintained separately from other GBF funds, with strict accounting, audit, and public disclosure guidelines. 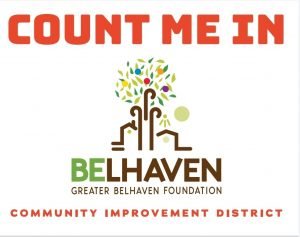 Isn’t Greater Belhaven lovely? She’s got on her multicolored, autumn wardrobe and seems poised to celebrate this special time of year. There aren’t many neighborhoods this beautiful or friendly in our city, or anywhere for that matter. People on almost every block know each other and visit frequently in in their yards or when we walk our dogs.

We’ve got problems, yes. But we also have solutions. Through your Greater Belhaven Foundation, we work to make our neighborhood better every day. Currently, our attention is centered on getting Greater Belhaven approved as a Community Improvement District. We need 60 per cent of our registered voters to gain approval for this initiative which we hope to complete this month. For you as property owners, it means just 6 mills more in property tax for every $1,000 of your property’s assessed value. For our neighborhood, your signature means designated funds that can be used for security, maintenance, improvements to parks and infrastructure, beautification through plantings, signage and blighted property acquisition.

But CID passage is just one of our initiatives. In cooperation with the Belhaven Heights Neighborhood Association, the Belhaven Improvement Association and the Belhaven Security Association, the Foundation also has worked to support the funding of the Fortification Street Project, the elimination of many encroachments to our neighborhood, the clearing and cleaning of blighted property, the creation of the Belhaven Town Center – and the many events that promote Greater Belhaven such as the annual Bright Lights, Belhaven Nights and Art in the Park.

All of these things, however, cost money. There are many wonderful nonprofit causes that you and your family might donate to at this time of year. But we hope you’ll make one of your year- end gifts to your neighborhood organization, the Greater Belhaven Foundation. An envelope is enclosed for your convenience in replying. Please let one of us know if you have questions – and thank you for being one of the more than 1800 Jacksonians who call Greater Belhaven home.

Between now and the end of the year, please following these Security Measures:

New Stage Theatre’s traditional holiday gift to the community—A Christmas Carol, A Ghost Story of Christmas—opens on Thursday, December 5 and runs through Sunday, December 22. Curtain times for public performances are 7:30 p.m. and 2:00 p.m. on Sundays. Tickets can be purchased at the box office, located inside the Jane Reid Petty Theatre Center, charged by phone by calling the theatre at (601) 948-3533 or ordered online at www.newstagetheatre.com. The production is sponsored by First Commercial Bank and St. Dominic’s.

New Stage Theatre returns with a holiday tradition! Ebenezer Scrooge is a wealthy man, rich in money and poor in spirit. He’s locked his solitary heart into a cashbox and forgotten where he’s put the key. Haunted by specters and visited by spirits of his past, present, and future, he journeys from the painful losses of his youth to the human kindness and deep joy of a glorious Christmas morning. Dicken’s classic tale reawakens the true spirit of Christmas in a heart-stirring Carol of profound beauty and redemption.

“We are excited to produce the traditional holiday favorite A Christmas Carol for our 54th season,” said Artistic Director Francine Thomas Reynolds. “Since New Stage first staged an adaptation of the Dickens’ novella, in 1984, no play has been as consistently produced at the theatre as A Christmas Carol. Five actors have played the role of Scrooge and 13 directors have helmed the production throughout the years. The theatre has delighted Mississippi audiences with four adaptations of the timeless Charles Dickens classic.”

“New Stage Theatre has produced A Christmas Carol twenty-four times,” continues Reynolds. “From life-size puppets to flying ghosts, some traditions have changed over the years but the powerful story of redemption in A Christmas Carolremains the same and will enchant audiences with its message of selfless giving. A Christmas Carol has everything: great story telling, singing, dancing, special effects and heart. I am looking forward to our audiences experiencing this production being performed by a cast of 18 adults and 14 youth actors.”

Special Holiday Events at New Stage Theatre During A Christmas Carol, A Ghost Story of Christmas

·      We will offer $25 tickets to those who bring a new unwrapped toy to the performances December 5-7. Customers must bring the item to the window and purchase tickets at that time. One toy per ticket. Tickets are subject to availability. Tickets can be purchased in advance during box office hours.
·      New Stage will continue to collect toys through December 12

Give the Gift of Theatre this Holiday Season!

Assisted Listening Devices: Available at every performance. Please call the box office to reserve a device.

$35
$30 for students, seniors, and military
Group discounts are available

We have three upcoming Town Hall Meeting regarding the proposed Community Improvement District that will take place at the Greater Belhaven Foundation Office located at 954 E. Fortification Street.  Parking is limited so please park at Froogel’s and walk down.

If you are unable to attend and would like more information please call or email Casey Creasey to set up a time to discuss the Petition and what the Community Improvement District can do for Greater Belhaven, 601-352-8850 ccreasey@greaterbelhaven.com.

Thank you to everyone who braved the cold Tuesday night to join us for our yearly party.  A special thank you goes out to our hosts Hailey and Jack Allin.  We celebrated all that is happening in Greater Belhaven and the many great things headed our way.  Our outgoing Board members who have served two terms are Barbara Austin, Claire Barksdale, Rob Pearigen and Bart Delashmet.  Their commitment to our neighborhood has been amazing.  We welcomed our new board members Jason Agostinelli, Ruffin Lowry and Hope Carter, we are honored that they are volunteering their time and talents.

Special awards were given to honor those who have gone above and beyond to help make Greater Belhaven all it can be.  Tamar and Peter Sharp are this year’s recipients of the “Heart of Belhaven Award”.  The Sharps purchased The Fairview Inn in 2006 and have been gracious and generous neighbors ever since.  Rob Farr is the recipient of this year’s Cavitt Taff Volunteer of the Year Award.  Farr is the chair of the Foundation’s design team.  This year he has organized to planning charrettes for Fortification Street, is helping in the Community Improvement District efforts, has helped with security planning, and has been the sounding board for several ideas and concepts.  Thank you to the Sharps and to Rob Farr for all you do for Greater Belhaven.

CARNIVAL OF THE ANIMALS is, in the words of the French composer, Camille Saint-Saens, a grand zoological fantasy for orchestra. PUPPET ARTS THEATRE, inspired by this famous musical score, set the show in a circus. It is a hilarious romp through animal, clown and other creature acts like chickens on a seesaw and tortoise and the hare re-creating their famous race. Rabbits on a trampoline and a six foot tall bird are featured in this show designed to entertain.
PUPPET ARTS THEATRE is a professional touring company under the direction of Peter Zapletal, an award-winning puppetry producer. His television specials, produced for Mississippi Public Broadcasting, have been seen nationwide on PBS. Mr. Zapletal received MA degree in puppetry from the Academy for Performing Arts in Prague, Czech Republic. He will be joined on stage by Olivia Hansford and Lesley Raybon. Jarmila Zapletal, a professional puppet maker and designer, shared in the creation of the puppets and the sets for the production.

Happy Halloween! The Belhaven Garden Club has been hard at work creating a Spooky Scene on Belvoir Place. Trick or Treating, games, music, face painting and food!! Belhaven Boo starts at 6pm with gates located at Belvoir/Riverside and Belvoir/Linden. $3 per person. The Greater Belhaven Foundation will also be there with information on the Community Improvement District as the Petition for interested parties to sign.

Thank you to everyone who came out on Tuesday October 8 to be one of the first residents to sign our Petition to form a Community Improvement District. We got off to a great start but let’s keep this momentum going! Please see below more dates that Petition will be out and about for you to sign. If you would like to schedule a time to sign please email me at ccreasey@greaterbelhaven.com. A copy of the Petition is also available for signing at NeighborHouse, 1104 North Jefferson Street. 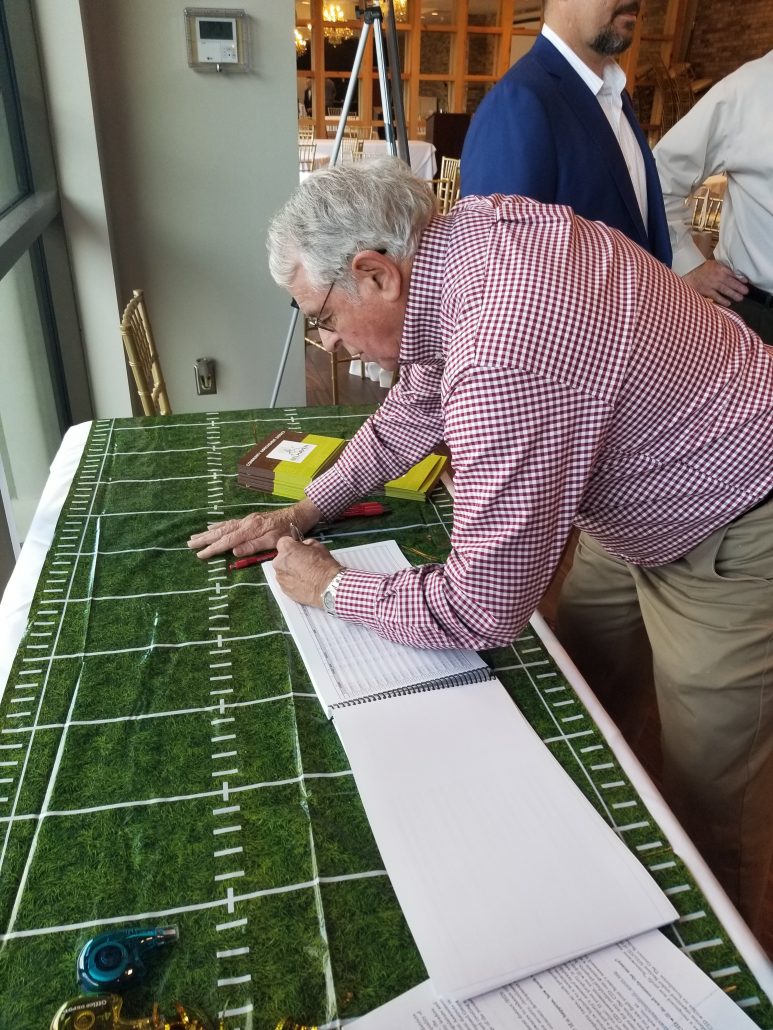 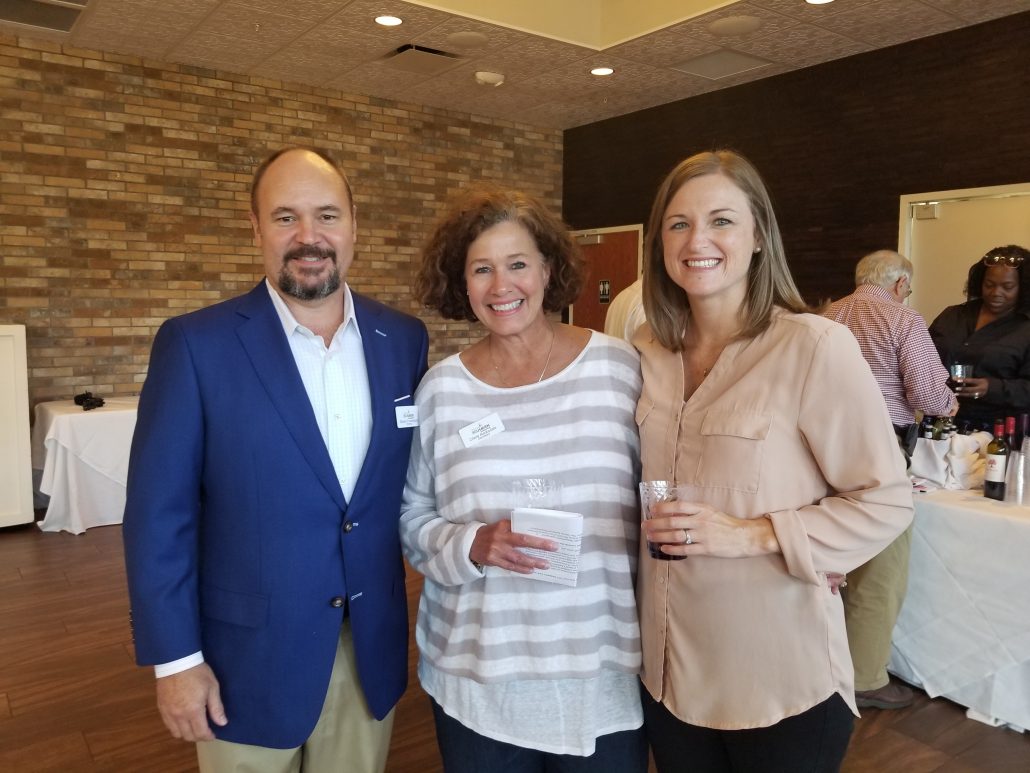 http://greaterbelhaven.com/wp-content/uploads/2017/02/GBF-Logo-Website.png 0 0 Greater Belhaven Foundation http://greaterbelhaven.com/wp-content/uploads/2017/02/GBF-Logo-Website.png Greater Belhaven Foundation2019-10-17 12:22:052019-10-17 12:22:05The Community Improvement District Petition Signing Kick Off Party was a Touch Down!! There is still time to Join the Team!!